2014 was a pivotal year for me. I changed jobs, I stepped up my Sass and JavaScript game, lived away from Austin for a few months, and saw parts of the domestic United States I had never seen before. I never could have guessed that was what was in store for me in 2014. I also never could have guessed that towards the end of the year, I’d have the opportunity to be a part of something that I had only dreamed of, but had convinced myself I shouldn’t even try. In a complete state of disbelief, I responded to an email I received exactly 365 days before the day of this post and I said “yes”. That email came from the Pastry Box Project. I still can’t believe six posts and a year later that Alex and Katy asked me to be a part of this. I read the PBP a lot—religiously almost. It makes me feel connected to our industry, it made me see that a lot of my own curiosities and fears about design and development are shared by others. I look up to a number of the writers, many who may or may not know the impact they’ve had on readers.

But with that, I want to touch on something I mentioned above, and I think this post is the perfect time to write about it. I “had convinced myself I shouldn’t even try”. I think back to that when I felt that way, and I think it was such a stupid idea (I don’t like using the word ‘stupid’ often but I think in this case, it's exactly the right word). For a while I let the open submissions deadlines whoosh by and convinced myself I wasn’t worthy. And that is a stupid, stupid notion. Gosh, if it weren’t for Alex and Katy, who reached out to me, I would have missed out on something I always wanted to do. Now, a year later, I can’t help but wonder how many other things I’ve let go by because I didn’t think I was capable of doing it. This frustrates me now to no end. It makes we want to go back in time in some fancy Back 2 the Future car and find that version of myself and shake her. 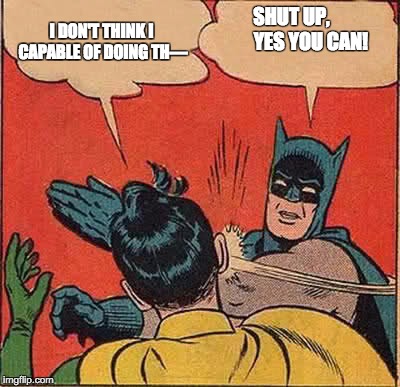 It’s a little ridiculous how we convince ourselves that we can’t do something. We’re so sure because we supposedly know ourselves better than anyone else, yet, we’re frequently wrong about our own capabilities. We frequently settle for less, convince ourselves not to do something because it’s easier and doesn’t involve rejection. We become complacent and think we made the right choice before ever having a chance to fail. The interesting part is that is when we fail. We’ve written the ending before writing the story.

Do yourselves a favor, fellow readers: try as much as you can to believe that you can do it. Sign up for that thing you’ve wanted to do. Say yes to the scary, exciting stuff. Say no to the soul-sucking, not exciting stuff. I think of Marie Kondo’s golden rule from her popular book: if it doesn’t bring you joy don’t keep it. Fear or self-doubt doesn’t bring you joy, so get rid of it. Don’t let your own fear stop you this coming year. You may have no idea what your 2016 is going to look like, but you have the chance to actually write it, yourself. At the risk of sounding like a motivational poster with an eagle on it, you won’t actually know until you try. Don’t wait for someone to ask you, but rather seek out what you’ve always wanted to do. Make a list and put it somewhere public, like Una did and before you actually do it, be like Jennifer and convince yourself—repeatedly—that you can do anything. Because you can and should. I hope the end of the year wraps up nicely, and I’m looking forward to what we do this coming year.